Shipping generates more CO2 than aviation. This solar-powered ship could change that

For his first few days at sea on the MS Porrima, Gunter Pauli was stunned by the silence aboard his solar-powered ship.

"When you have no engine running, there's silence. There's a real sense of awe and resilience, and you have a lot of time on your hands to reflect," the Belgian entrepreneur and economist said in a phone interview. "There's a clear feeling of, 'Oh my God, I'm vulnerable -- I better use what I have carefully."

Using limited resources effectively is the core philosophy underpinning the Porrima, a concept ship centered on environmental research, which aims to show how sustainable technology could revolutionize the shipping industry.

Maritime transport drives over 80% of global trade, but it disrupts marine ecosystems, contributes to ocean acidification and accounts for more CO2 emissions than aviation each year.

The ship set sail with a small crew from Osaka, Japan on December 18, and is expected to make dozens of stops on five continents. It will complete a three-year circumnavigation voyage before returning to Japan in time for the 2025 World Expo. 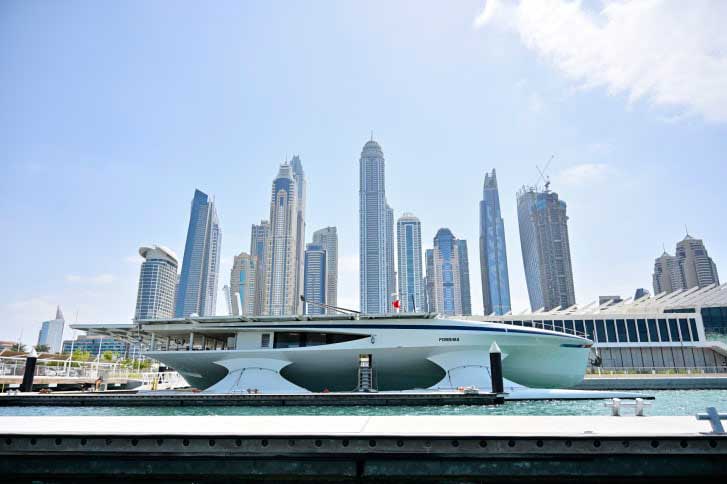 The MS Porrima pictured in March during a scheduled stop in Dubai. Credit: Audrey Meunier

The ship is a case study in sustainability. A miniature farm allows Pauli to cultivate edible spirulina algae and mushrooms below deck, while air bubble nets prevent overfishing by separating fish by weight and then releasing the reproductive females, which tend to be heavier due to their eggs. As well as being largely powered by solar panels, the vessel will soon be equipped with a filter that isolates and concentrates nanoplastics from seawater and converts them into hydrogen fuel.

Pauli believes that design features on board the 118-foot-long, 79-foot-wide ship are just as important as green energy production when it comes to promoting Porrima's environmental message.

The interiors of the Porrima's two primary rooms, the VIP suite and the main hall, were inspired by an eclectic mix of Russian matryoshka dolls, Japanese origami and Swiss Army knives.

With limited room on board, the dolls inspired a series of storage solutions that easily slide and fit inside one another to save space. The intricacy of origami, meanwhile, is replicated in various shelving units, seating areas and tables that can surreptitiously fold into walls like drawers. Lastly, the adaptability of the Swiss Army knife is reflected in the multipurpose main hall, which can be converted into a classroom, exhibition space, library or dining hall.

These three influences may at first seem disparate, but Pauli said they are tied together by the efficient and creative use of minimal materials. He used ideas from each to "transform" the Porrima's internals, he added.

"The ship is a compact set of practical tools integrated into one unit," Pauli said. But it is also, he added, is inspired by art.

Believing that "a great artist is a great antenna in society," Pauli modeled his design on renowned painter and theorist Michelangelo Pistoletto's notion of the "Third Paradise," which proposes a balanced convergence of nature and technology. In turn, the 88-year-old Italian artist, who also spoke to CNN, believes that the ship offers "the possibility" of making his concept a reality.

"The climate crisis is the situation we find ourselves in after the evolution of our technology, but the more we are free, the more we advance, the more we must be responsible," Pistoletto said over the phone. "And art is the interaction of autonomy and responsibility."

Pistoletto is among several artists whose work will be displayed inside the ship, which he described as "the reintegration of technology into nature."

For Pauli, this sense of responsibility -- for the environment and communities bearing the brunt of unsustainable practices -- was the driving force behind the project. "We have done too much analysis (on environmental issues), and too much analysis on the problem often leads to paralysis. I knew that whatever we're doing is falling way short of what is needed, but it's also falling way short of what is possible.

"We can't just improve on what we have," he said. "You have to use your consciousness and creativity to imagine the next thing and the next thing cannot be a mere improvement. So I decided to start creating projects that were considered impossible."

Interactive education is the at the heart of the Porrima's three-year journey. At many of its stops across the globe, Pauli hopes to connect with members of the public, academics and industry leaders while teaching them about the ship's design. The main hall, when transformed into a classroom, will be used to teach children about the innovations on board, with the hope of inspiring future generations. 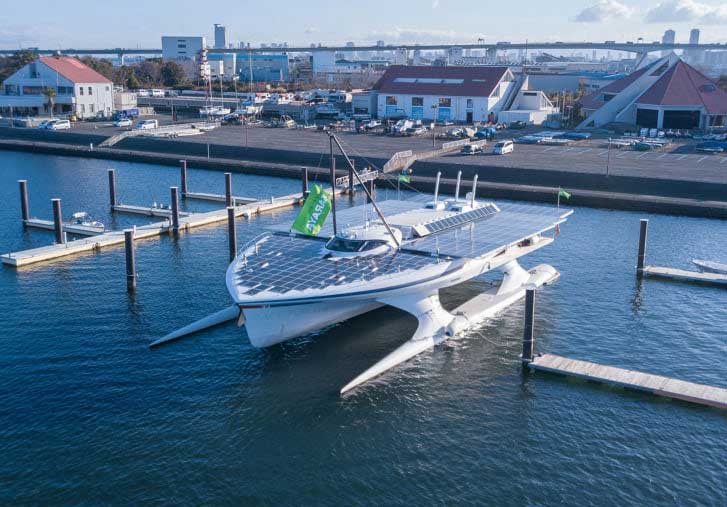 The MS Porrima pictured in Osaka, Japan, prior to its departure. Credit: MS Porrima's Blue Odyssey/Handout

But Pauli also hopes to inspire change in the immediate future, with some of the ship's technology expected to be disseminated through the shipping sector. By 2024, Pauli said, his nanoplastic filters are set to be installed on a thousand ships in the Mediterranean Sea to initiate a larger-scale cleaning campaign. And by 2025, Morocco is scheduled to launch a fleet of ships equipped with Pauli's air bubble fishing technology, he added.

"It's not enough to invent something. Once you've done something unique, democratize it and make it available," he said, adding: "There's a sense of empowerment when you realize that this technology can really be used to help communities that rely on unsustainable practices."


Source for the article: https://edition.cnn.com/style/article/ms-porrima-shipping-sustainability-scn/index.html