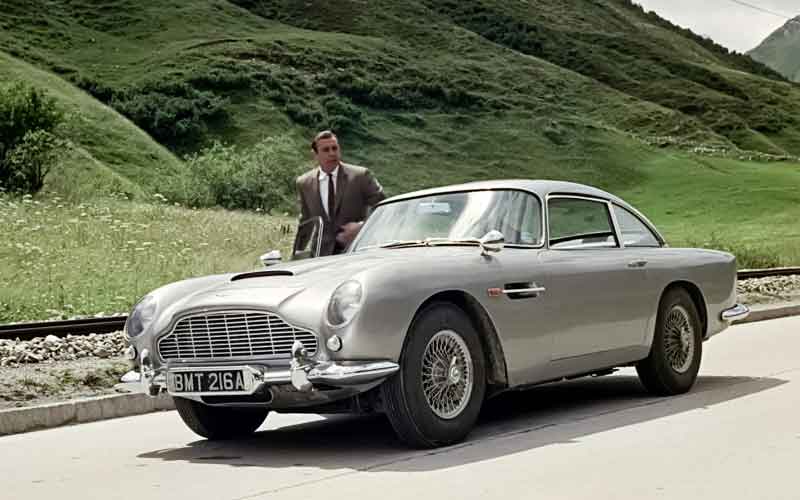 The Aston Martin DB5 is one of the most famous cars in the world thanks to Oscar-winning special effects expert John Stears, who created the deadly silver-birch DB5 for use by James Bond in the film, Goldfinger (1964). Although Ian Fleming had placed Bond in a DB Mark III in the novel, the DB5 was the company's latest model when the film was being made.
1 / 10 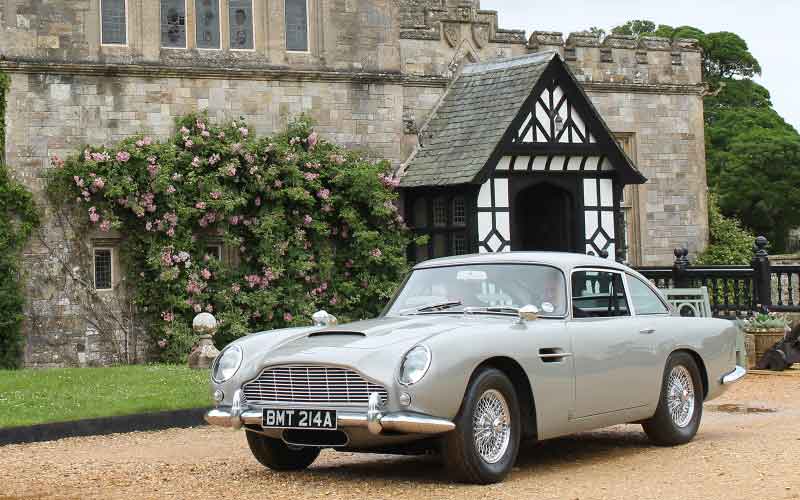 The car used in the film was the original DB5 prototype, with another standard car used for stunts. To promote the film, the two DB5s were showcased at the 1964 New York World's Fair, and it was dubbed "the most famous car in the world", and subsequently sales of the car rose. In January 2006, one of these was auctioned in Arizona; the same car was originally bought in 1970 from the owner, Sir Anthony Bamford, by a Tennessee museum owner. A car, mainly used for promoting the movie, is now located in the Louwman Museum, Netherlands. The first DB5 prototype used in Goldfinger with the chassis number DP/216/1 was later stripped of its weaponry and gadgetry by Aston Martin and then resold. It was then retrofitted by subsequent owners with nonoriginal weaponry. It later appeared in the 1981 film, The Cannonball Run, in which it was driven by Roger Moore. The Chassis DP/216/1 DB5 was stolen in 1997 from its last owner in Florida and is currently still missing.
2 / 10 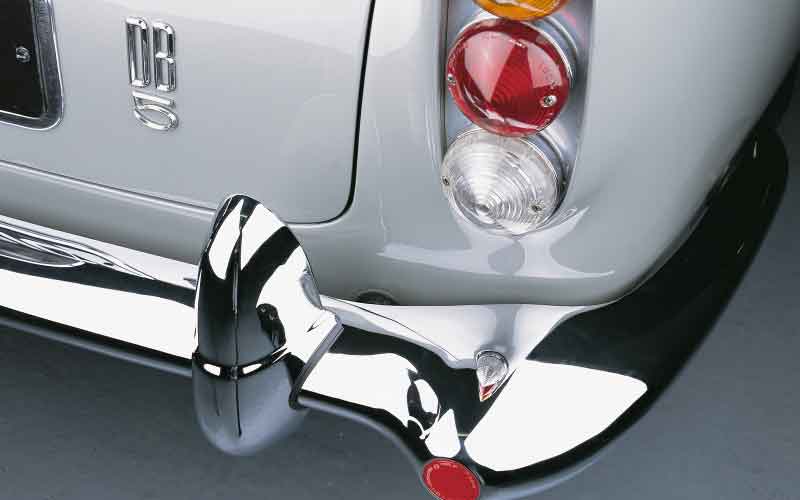 Modesty Blaise and Willie Garvin are also seen driving an Aston Martin DB5 in the Comic-Book adaptation of the Novel (and in the story of the Novel itself) La Machine (1963), a car which did not become associated with James Bond until the release of the film Goldfinger the following year. (In the Goldfinger novel Bond drives the older Aston Martin DB Mark III). This car also featured in The Mind of Mrs. Drake (1965). Since the film, the DB5 has become closely associated with the James Bond franchise and is considered to be the quintessential vehicle of the character. As such, it has reappeared in subsequent films over the years. Within the universe of James Bond, the same car (registration BMT 216A) was used again in the following film, Thunderball, a year later.
3 / 10 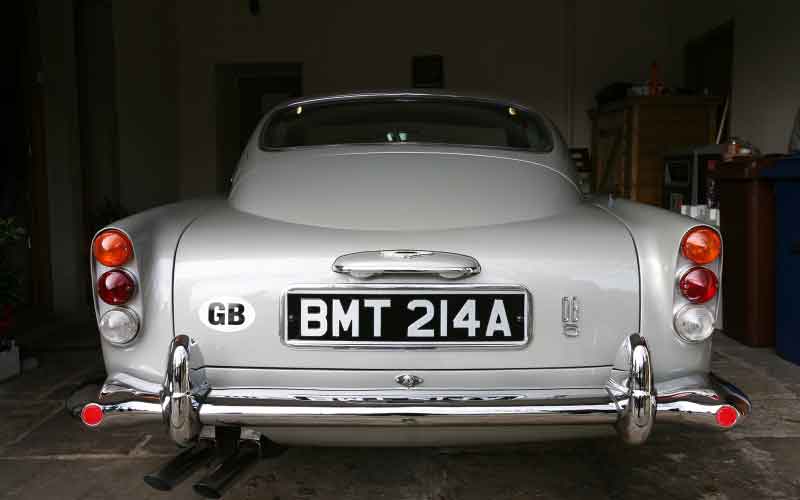 A different Aston Martin DB5 (registration BMT 214A) was used in the 1995 Bond film, GoldenEye, in which the car is Bond's personal vehicle and has no gadgets. Although it did come equipped with a champagne cooler in the arm rest and a fax machine. Three different DB5s were used for filming. This same car briefly reappeared in the next film, Tomorrow Never Dies (1997), and was set to make a cameo appearance in the Scotland-set scenes in The World Is Not Enough (1999), but these were cut in the final edit. Yet another DB5 (registration 56526) appeared in Casino Royale (2006), this time owned by the villain, Alex Dimitrios. This car has Bahamian number plates and left-hand drive (where the previous British versions had been right-hand drive). In the film Bond wins the car from Dimitrios after beating him in a card game.
4 / 10 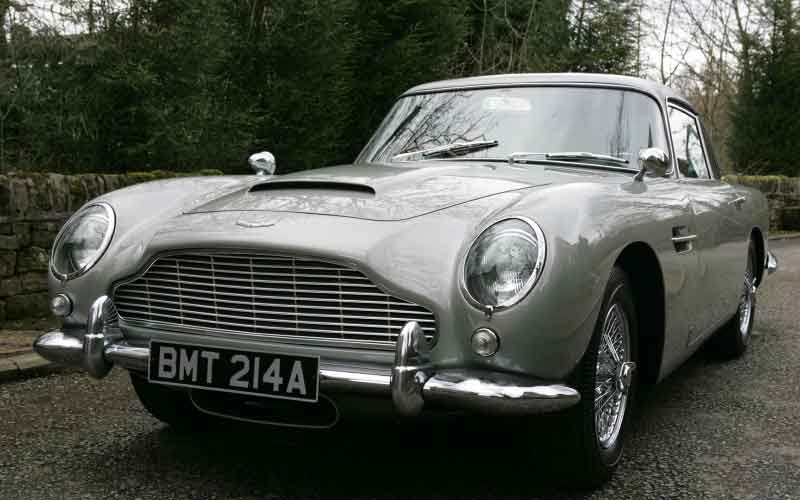 The Goldeneye DB5 currently resides at The London Film Museum in Covent Garden. Of the three cars used in the production, one car was filmed for the static ocean side shot, one's participation is unknown, and DB5/1885/R was driven in the chase scene against the Ferrari in Monte Carlo. DB5/1885/R was bought at a Christies auction in 2001 and entered the Guinness Book of Records that year for the highest paid for a Bond memorabilia. It was first exhibited at the Bond exhibition at Beaulieu before moving to its new home in The London Film Museum.
5 / 10 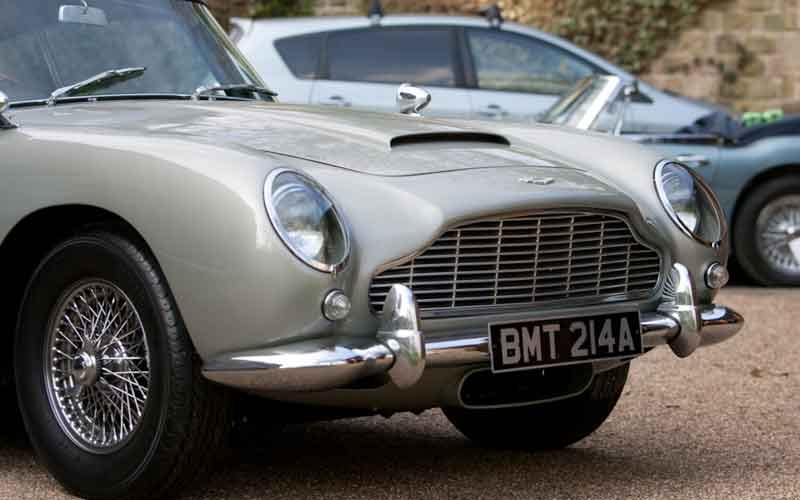 Another silver-birch DB5 with the original registration BMT 216A was used in the 23rd James Bond film, Skyfall, during the 50th anniversary of the release of the first James Bond film Dr. No (1962). It is unclear if this car is meant to be the same one Bond won in Casino Royale, refitted with British number plates, right-hand drive, and gadgets. The car is destroyed in the film's climactic finale. It is seen again in Spectre (2015), firstly in Q's underground workshop in various stages of rebuild, and at the film's ending, fully rebuilt, with Bond driving away with it.
6 / 10 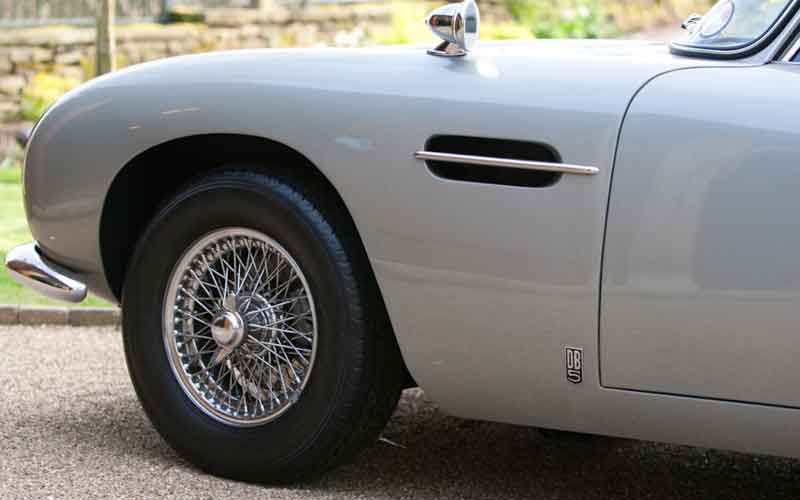 On 1 June 2010, RM Auctions announced the upcoming auction of a DB5 used in both Goldfinger and Thunderball. The owner (Jerry Lee, president/owner of WBEB Radio in Philadelphia, Pennsylvania) originally bought the car from the Aston Martin company in 1969. At the auction, the DB5 was sold for £2.6 million. (£2.912m with commission) equates to $4.6m.
7 / 10 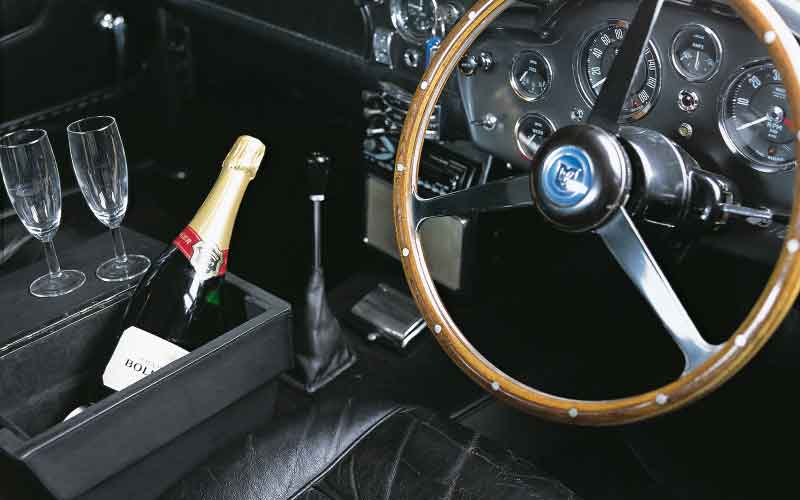 Aside from its use in the Bond films, the DB5 also appeared in "The Noble Sportsman", a 1964 episode of "The Saint" TV series starring future Bond, Roger Moore. The car in question was the original Chassis DP/216/1 DB5, with the registration BMT 216A, used in Goldfinger. The episode was filmed before Goldfinger, when the car was still painted in its original dark red coat. The Chassis DP/216/1 DB5 also appeared in the 1981 film The Cannonball Run, in which it was again driven by Moore (despite never having driven the car during his Bond tenure). In the film, Moore plays Seymour Goldfarb, Jr, a man who believes himself to be Roger Moore, who participates in a madcap, cross-country road race. Since its appearance in Goldfinger, the car had been stripped of its gadgets and re-registered as a regular road car. The car appears with its new registration number, 6633PP, and replica gadgets that were fitted to the car for the film.
8 / 10 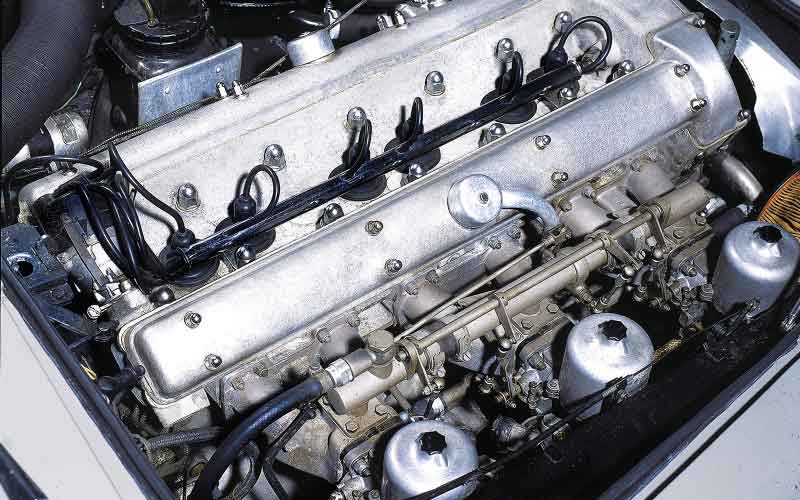 The 1983 reunion telefilm The Return of the Man from U.N.C.L.E.: The Fifteen Years Later Affair includes a brief cameo by George Lazenby as "JB", a white-tuxedoed British man shown driving a DB5, who assists Napoleon Solo during a car chase. "It's just like On Her Majesty's Secret Service," enthuses a female character at the conclusion of the cameo. This special came out in 1983, the same year as Octopussy and Never Say Never Again.
9 / 10 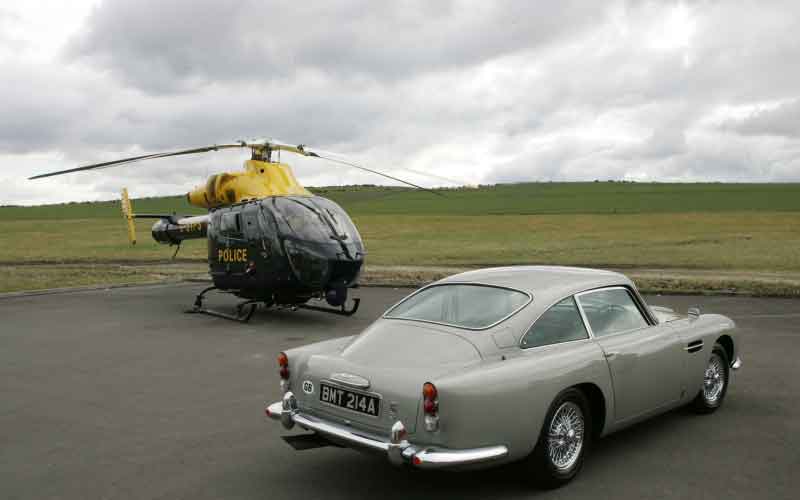 With Goldfinger, Corgi Toys began its decades-long relationship with the Bond franchise: they produced a toy of the car, which became the biggest selling toy of 1964. A highly detailed 1:24 scale plastic kit was also produced by Airfix between 1966 and 1970. A highly detailed 1:24 scale die-cast model with many working features was produced as a limited edition in 2006 for Casino Royale, by the Danbury Mint. In January 2011 a 1/8 scale model was released by part work magazine publisher GE Fabbri in the UK. Over 85 weekly parts, the model builds into one of the biggest 007 scale models to date, with working gadgets and lights. In 2015 Hotwheels Elite released their Cult Classics Goldfinger Aston Martin DB5 in 1/18 and 1/43 scale, the 1/18 model featured many of the gadgets from the original film.
10 / 10