Underwater photographer of the year 2018 winners

"Perfectly lit and composed, I predict that there will never be a better shot of this subject," one judge said. Friedrich had to create a panoramic image and use lights to give the image more depth, because of restricted space.

While the photographer was shooting these three nudi a moray eel suddenly appeared out of the blue totally changing the composition. As the judge noted: "the result is a superb demonstration of blur which I would never have believed would work against the three nudis. The soft left eye of the moray together with the gleaming white teeth towards the bottom round off this image." 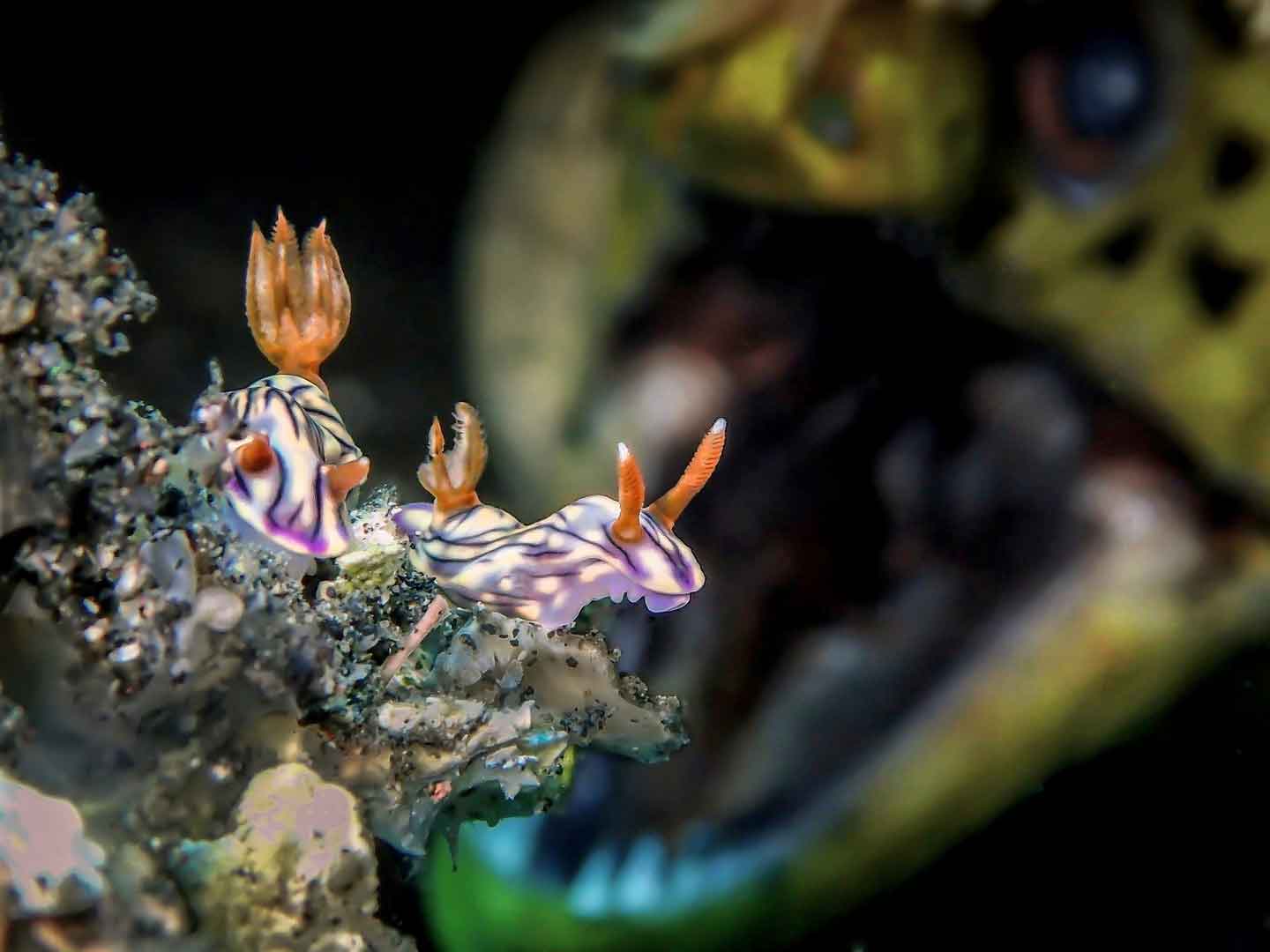 Thomas’s initial idea was to frame a split shot of one swan feeding below the surface of the water but when he noticed how comfortable they were around him he was confident, with some patience, he could get that magical shot of the two. 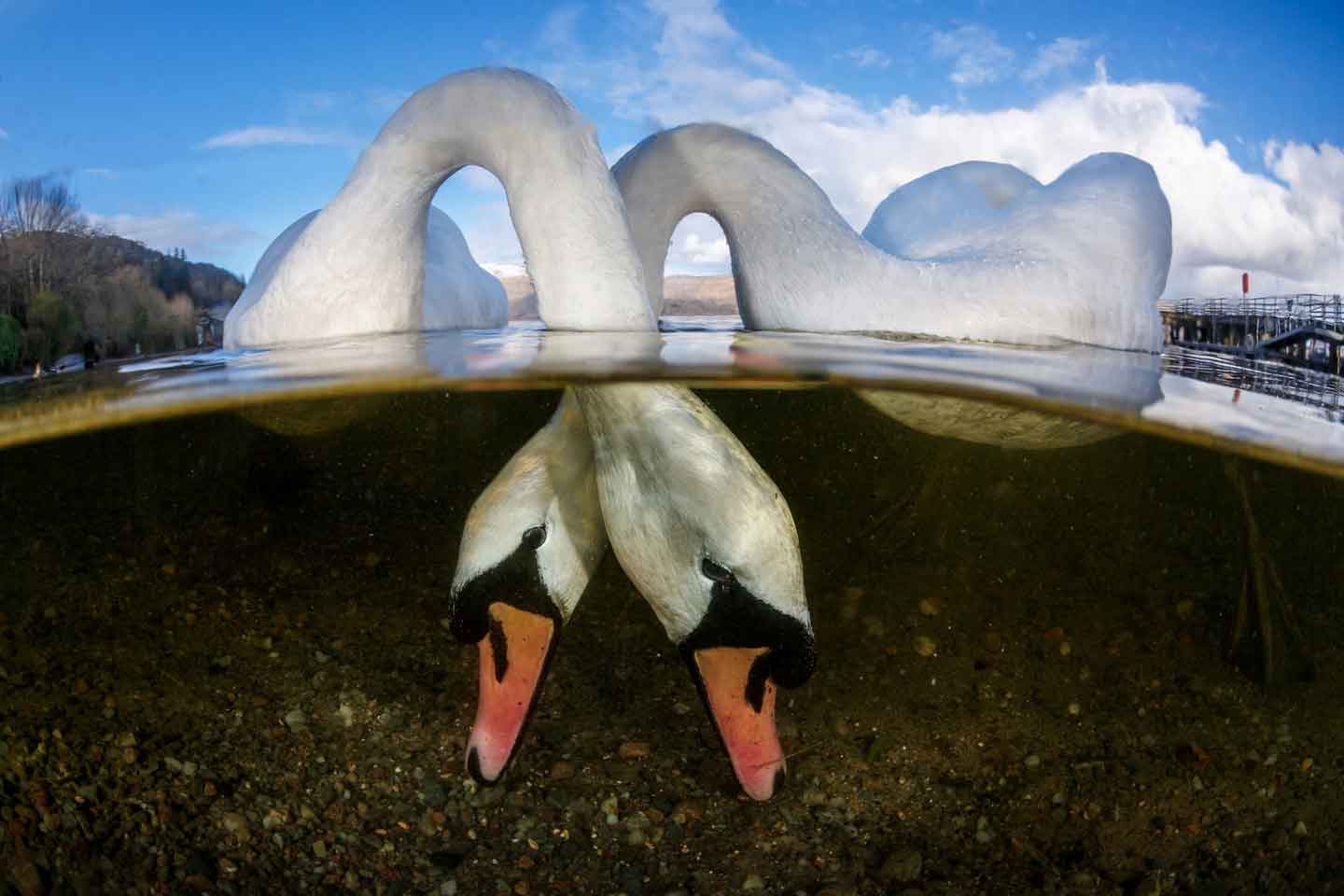 Stephenson noted that this ‘group’ of male pikes were looking for a mate. Once they found one they pursued her relentlessly and were completely transfixed on gaining her attention. This allowed him to get close in front of the fish, fill the frame and led to him getting lots of good eye contact. 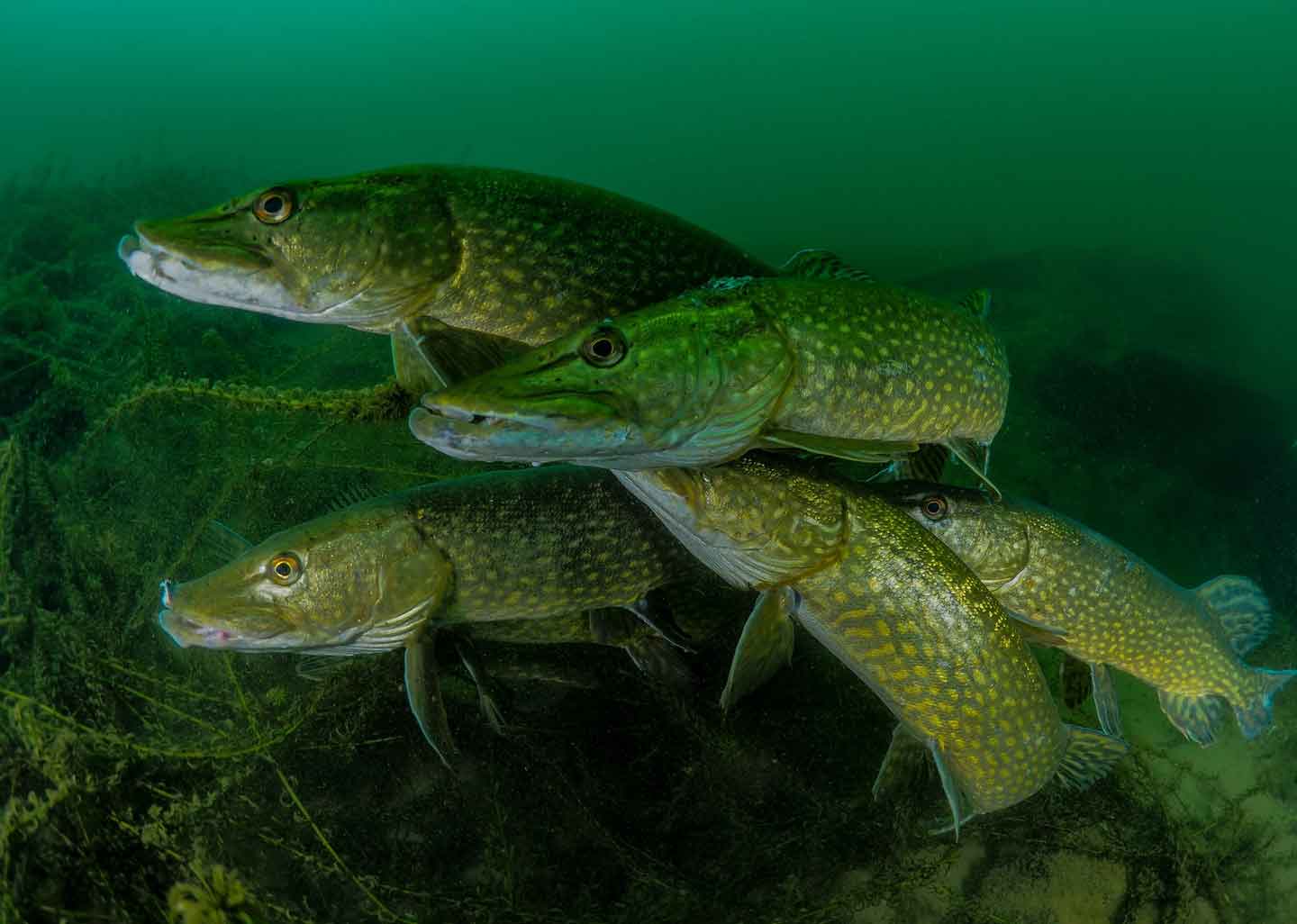 Tonga offers probably the best opportunity to interact with humpback whales in blue water. The judges commented: "An amazing subject, caught at the precise peak of the action. Greg’s split level is an image that truly justifies being a split level. The gesture of the humpback reaching out with its pectoral fin completes the moment." 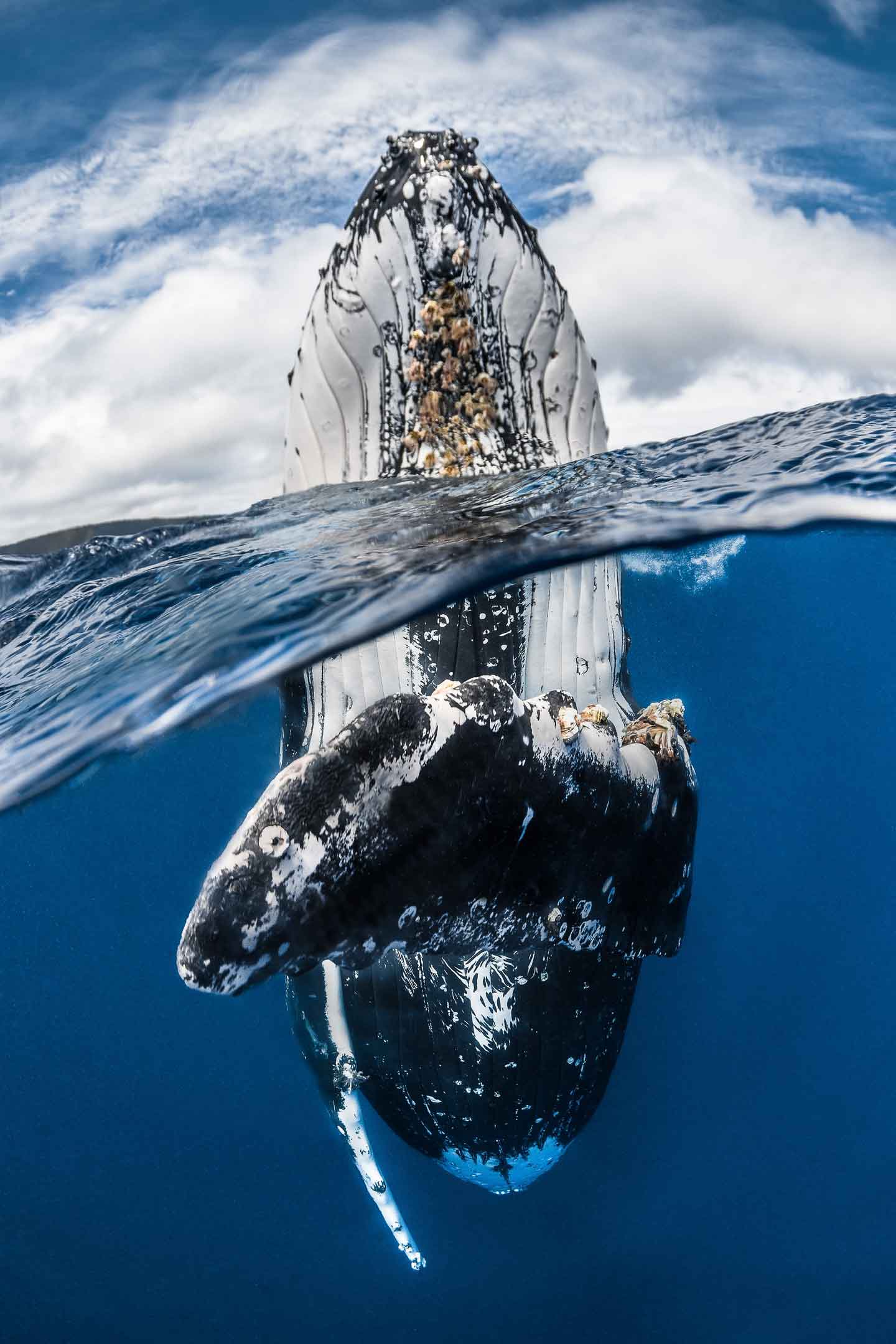 The pond where Gross photographed this has the highest density of seahorses on Earth, but finding three together was a real gift. One judge commented: "Shane’s captivating frame offers a really fresh interpretation on this iconic subject, with three individuals silhouetted in a soup of prey, against a carefully exposed backlight." 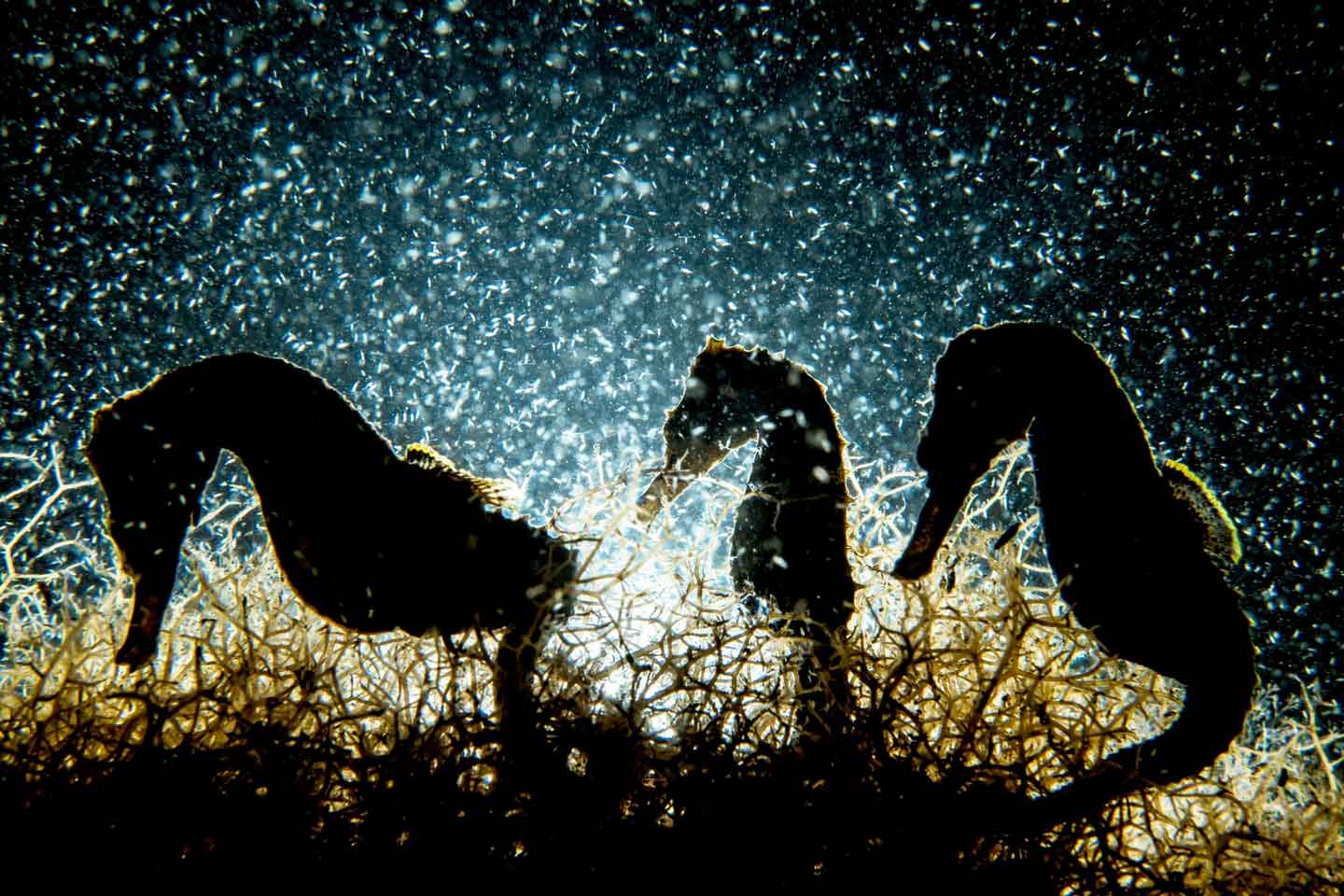 Houppermans caught this dramatic shot while diving to the wreck of the Caribsea and seeing the fierce-looking, but docile, sand tiger sharks that frequent the wreck. On this particular day millions of tiny fish, collectively known as "bait fish", were grouped together in an enormous bait ball above the wreck. As she moved with the shark through the water the bait fish parted way, giving her a clear shot of the underside of this beautiful shark. 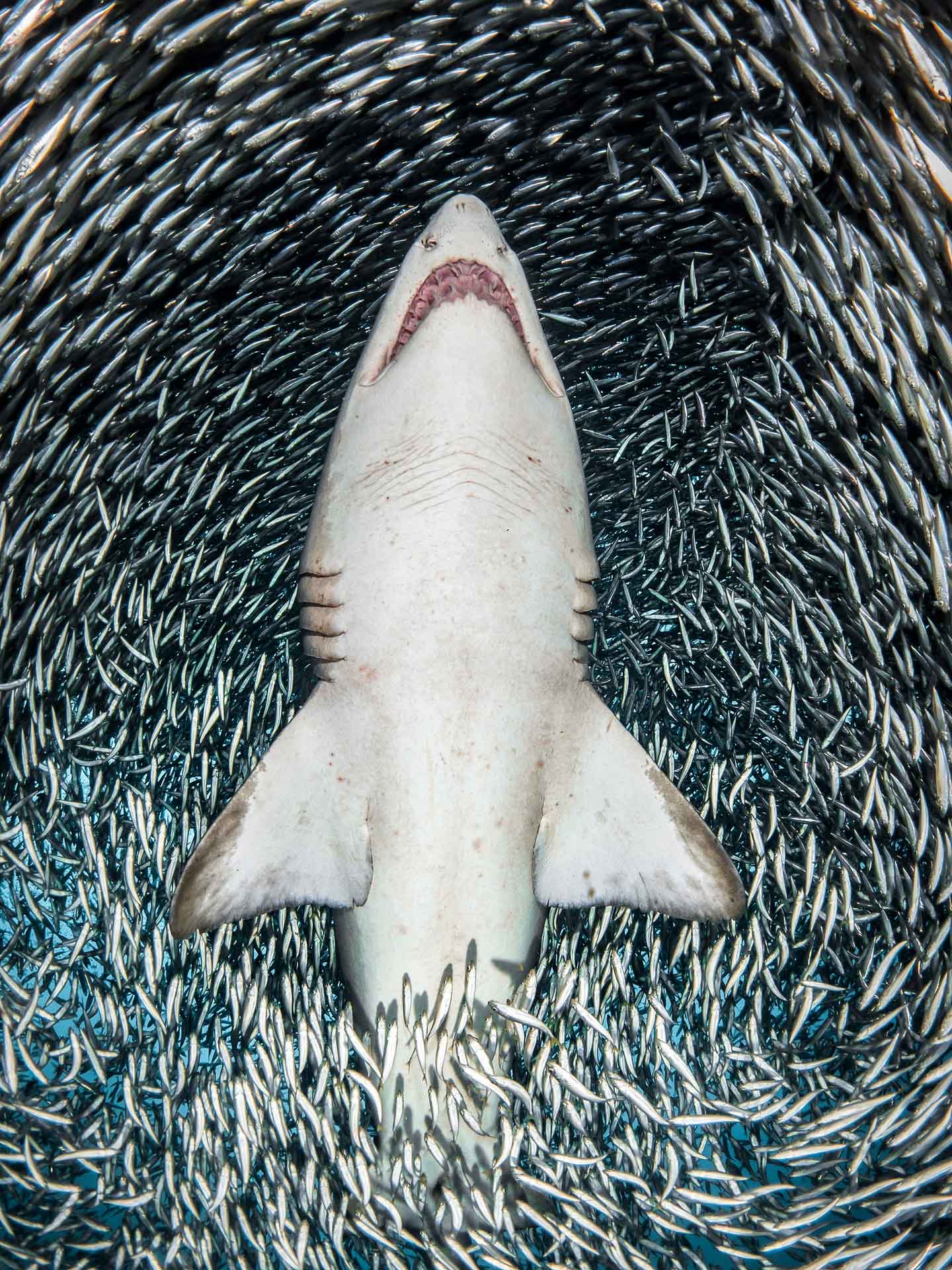 These two tompot blennies are not kissing but engaged in a ferocious battle over mating rights. As one judge pointed out: "Who says British fish lack colour and character? This shot has got it right in all the right places. Sharp when needed and blurred when not." 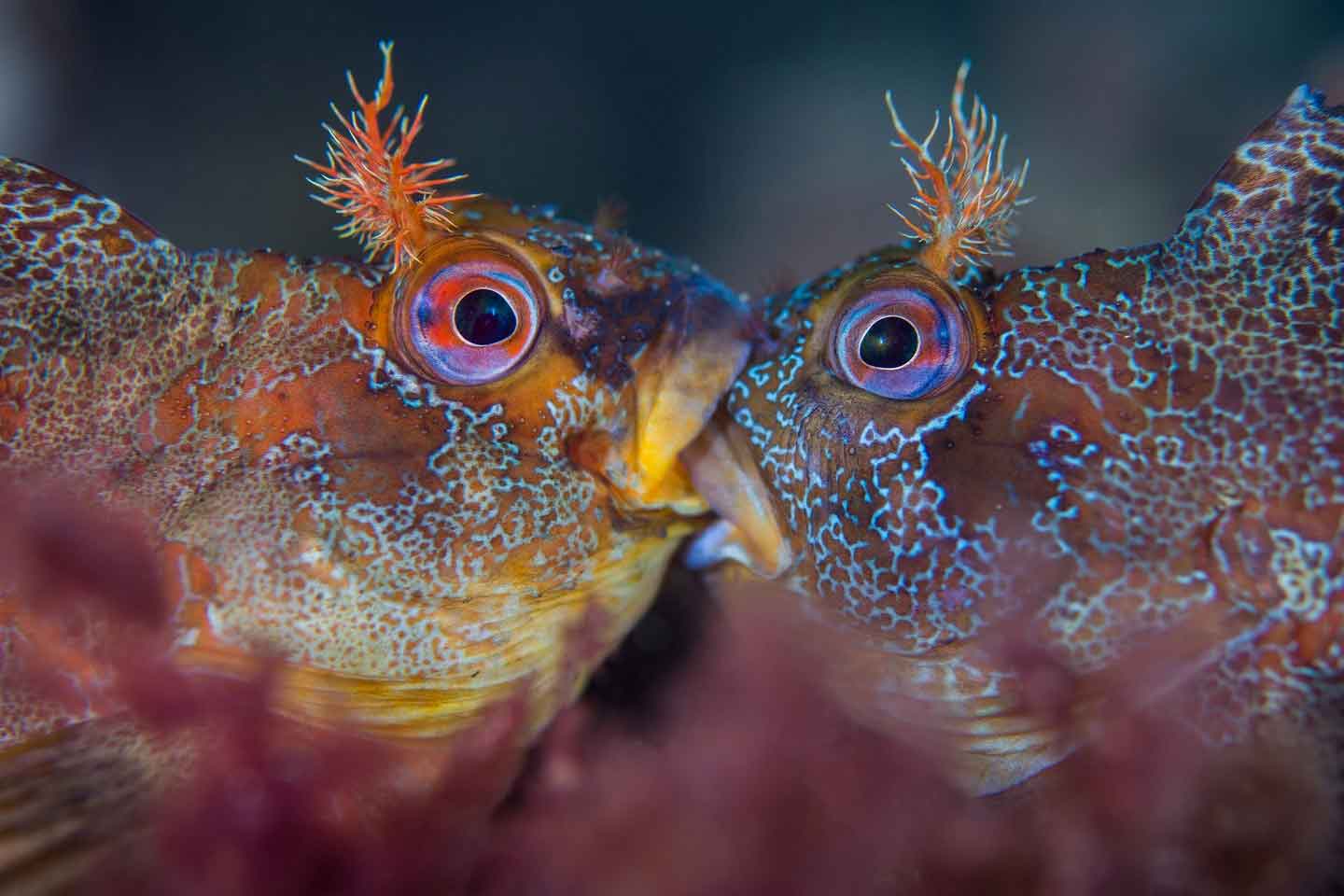 In winter time the Izu peninsula in Tokyo area becomes a stopover for the Asiatic cormorant before they move on to China. This is the best moment to try to shoot this amazing sea bird whilst they dive and fish. 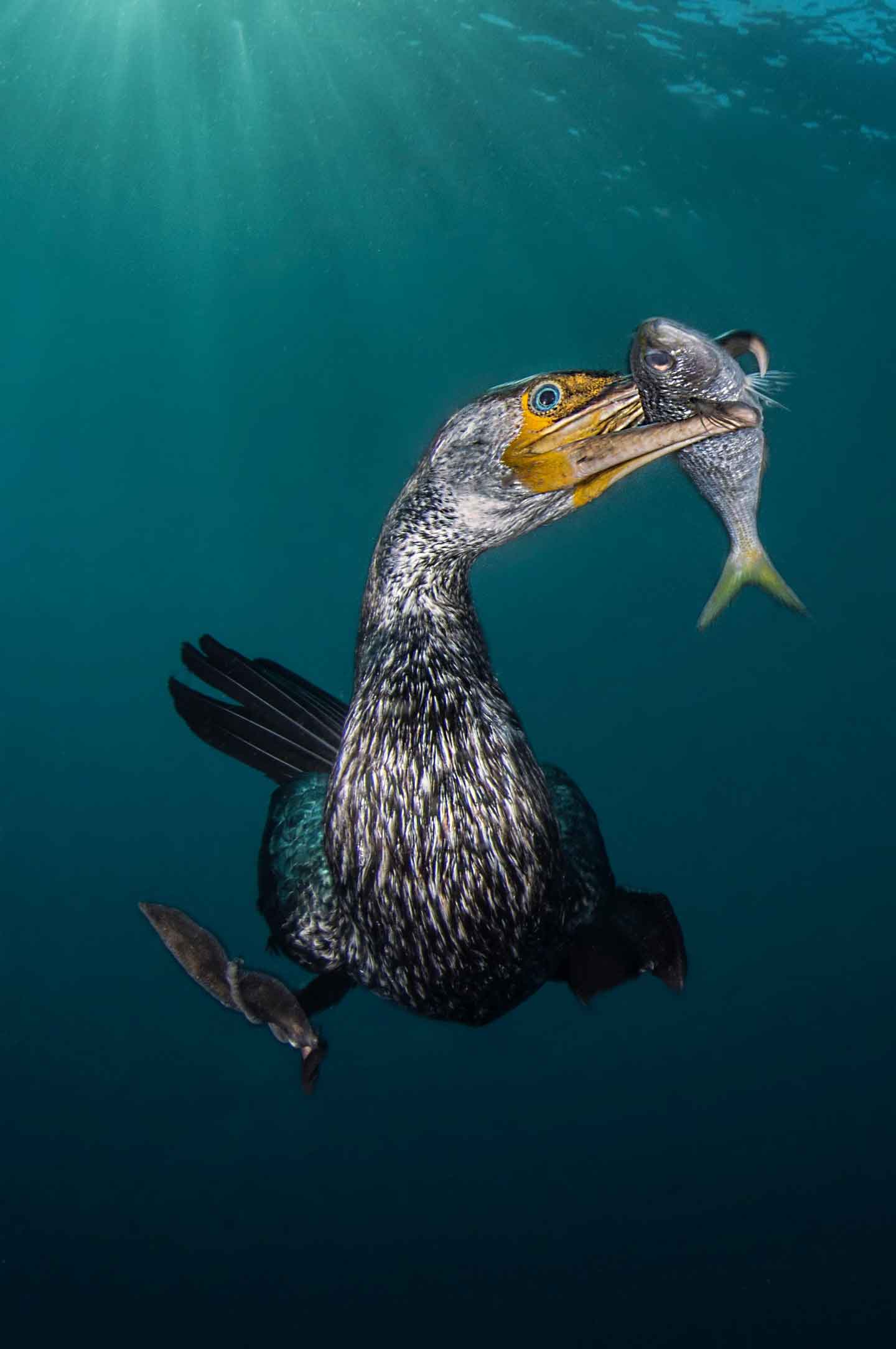 Judge’s comments: "Crocodiles are popular subjects, their jaws are both eye-catching and graphic. Borut’s image perfectly suits black and white, with the sinuous reflections on the surface of the inky water". 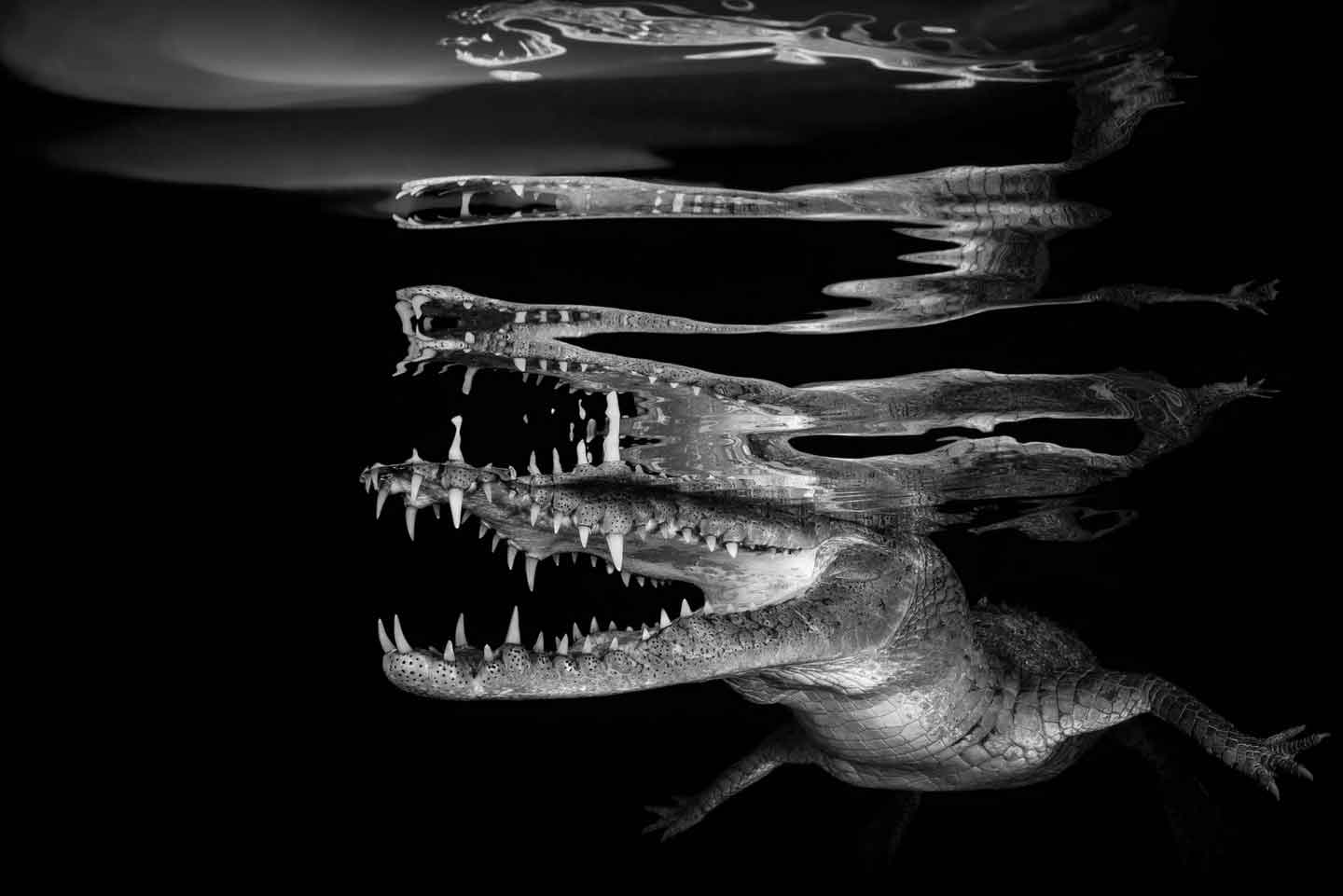 The Farne Islands are home to thousands of grey seals (also known as Atlantic seals), and each autumn hundreds of pups are born here. "This seal obviously had an itch to scratch, as at one point he lay on his back waiting for his belly to rubbed, pulling some interesting shapes in the process and which must have led to the satisfied grin he appears to be sporting." 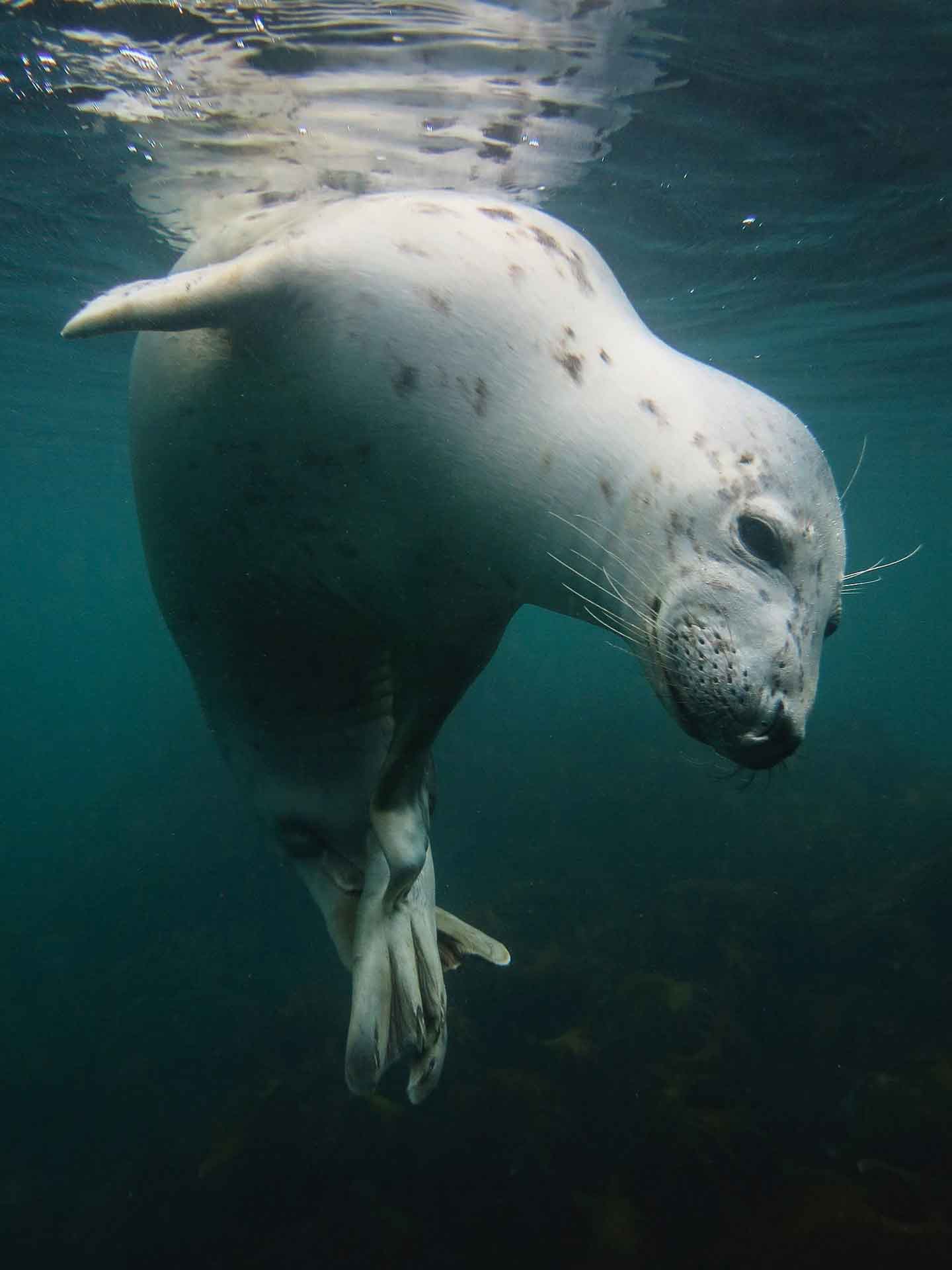 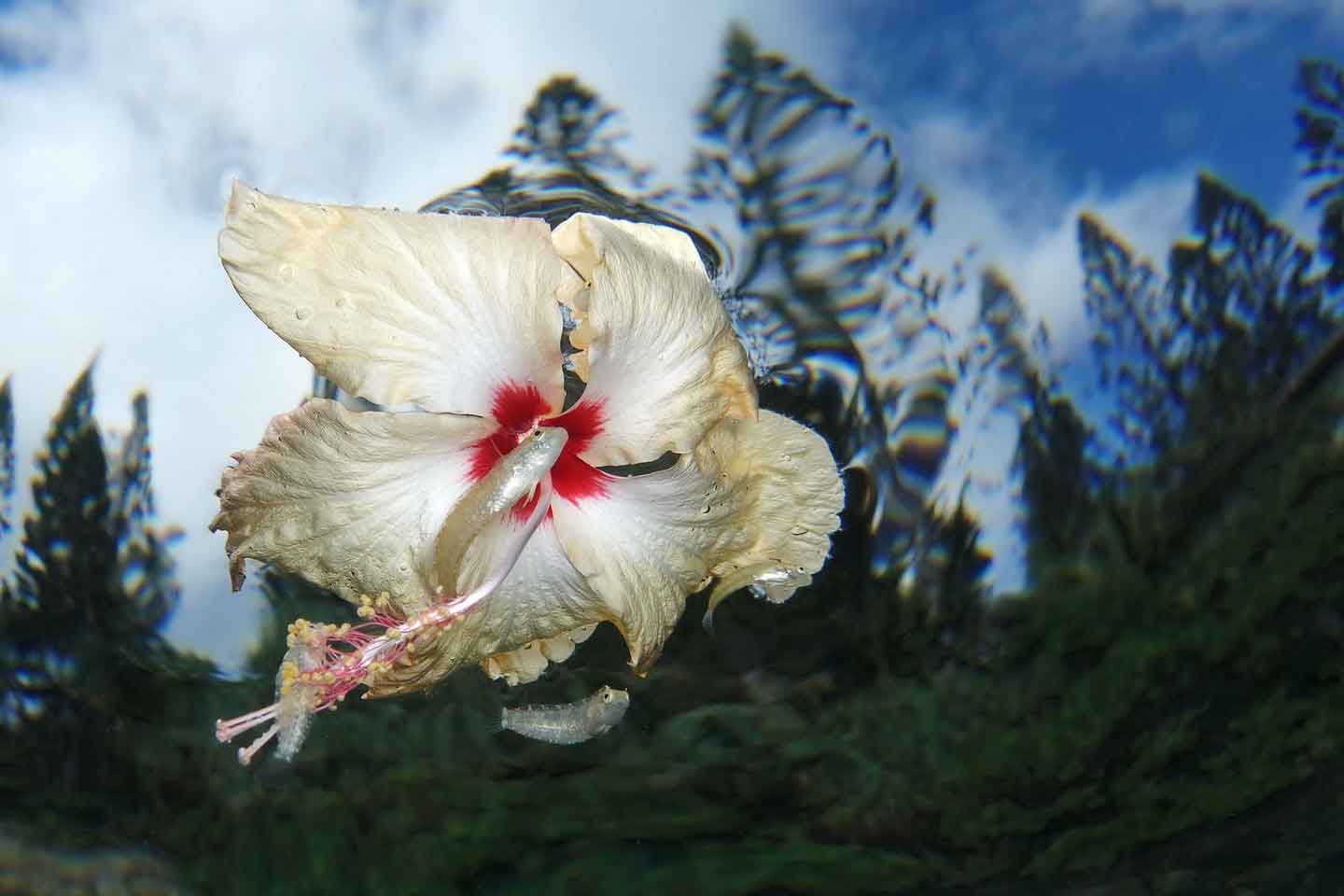