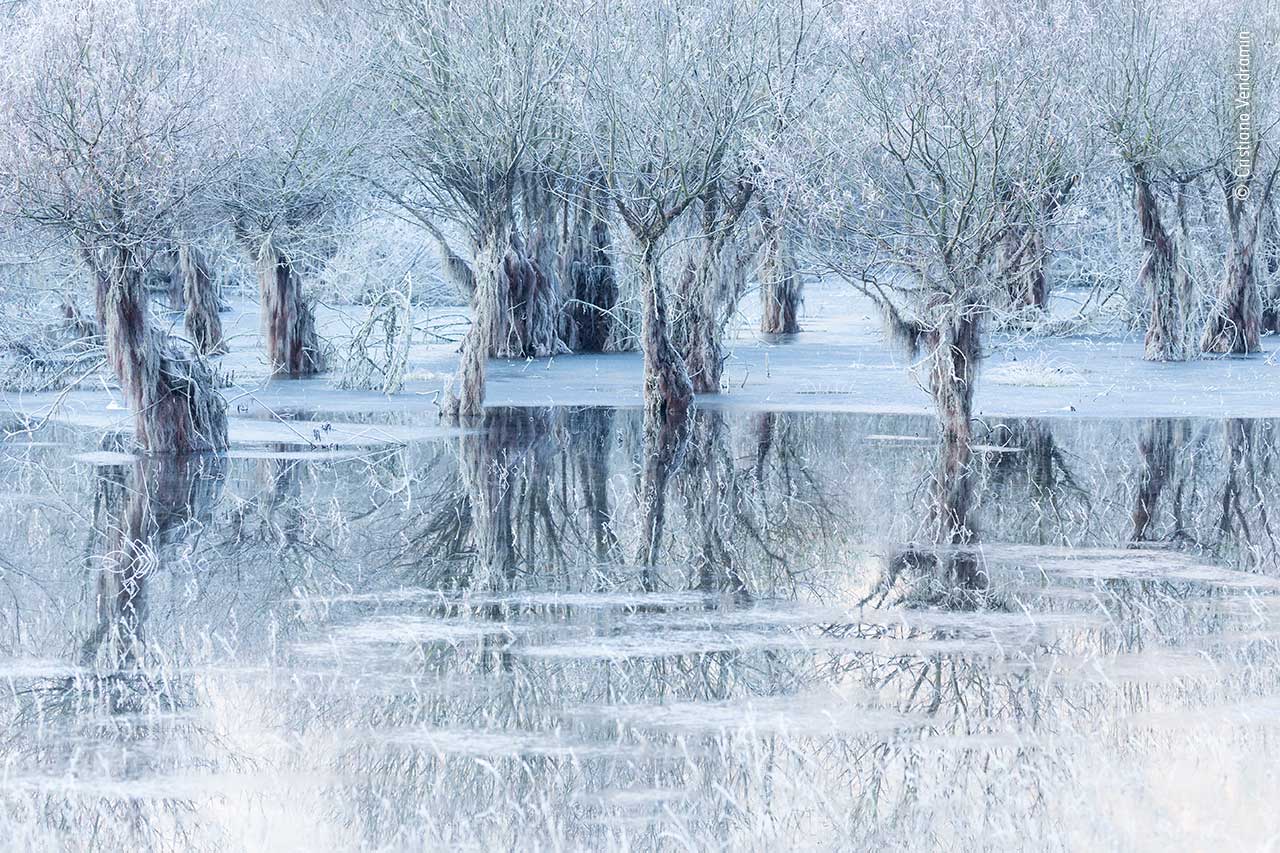 When Italian photographer Christiano Vendramin visited Santa Croce Lake in northern Italy in 2019, he noticed the water was unusually high. While the four-mile lake is bustling with action in the warm summer months, it lays dormant in winter. Icy storms had blanketed partially submerged willow trees in snow, freezing the scene in place.


Positioning himself on a muddy bank, he framed the trees in his viewfinder and shot this year's winning People's Choice Award photo for the Wildlife Photographer of the Year contest, London's Natural History Museum announced this week. The image, titled 'Lake of Ice,' captivated voters with a snapshot of glimmering willows mirrored on glassy ice, creating mesmerizing symmetry.


Since 1965, the competition has showcased stunning images of Earth's biodiversity. A record-breaking 50,000 photos were submitted to this year's contest from all around the world. Each photo is judged on its authentic representation of the natural world, technical excellence, and ability to inspire advocacy and conservation for animals. The photos are designated into 13 categories. The public nominates their top picks from a shortlist of 25 shots. The Natural History Museum recognizes one overall winner and four finalists for the People's Choice Award.


Vendramin's image gathered a total of 31,800 online votes after voting closed on February 2, Gizmodo's George Dvorsky reports. The winning entry was from the "Wetlands - The Bigger Picture" category.


"I hope that my photography will encourage people to understand that the beauty of nature can be found everywhere around us, and we can be pleasantly surprised by the many landscapes so close to home," Vendramin says in a statement. The area is 30 minutes from Vendramin's hometown and was frequently visited by Vendramin and a dear late friend of his who also practiced photography.


Vendramin’s winning photo and the top four “highly commended” finalists will be displayed in the Wildlife Photographer of the Year exhibition through early June at the museum.

Here are the finalists and what the museum had to stay about each of them.

Shelter from the rain 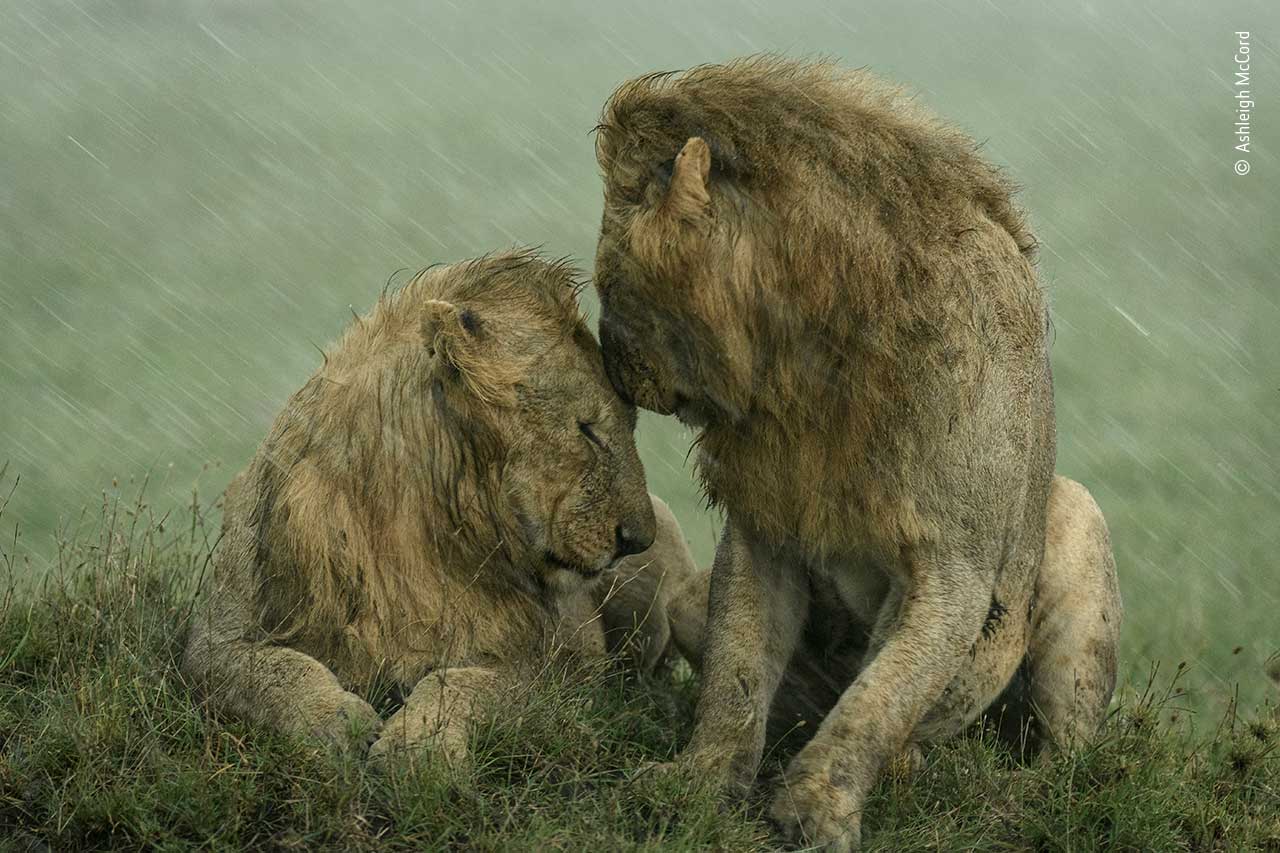 Finalist Ashleigh McCord's image "Shelter From the Rain" shows two male lions nuzzling each other during a storm. As the rain went from a sprinkle to a downpour, McCord says the lions' cuddling intensified, per Gizmodo.

The photo was shot while McCord was abroad in Kenya. It is a part of the "Behaviour: Mammals" category, capturing an act of affection between two big cats.

Hope in a Burned Plantation 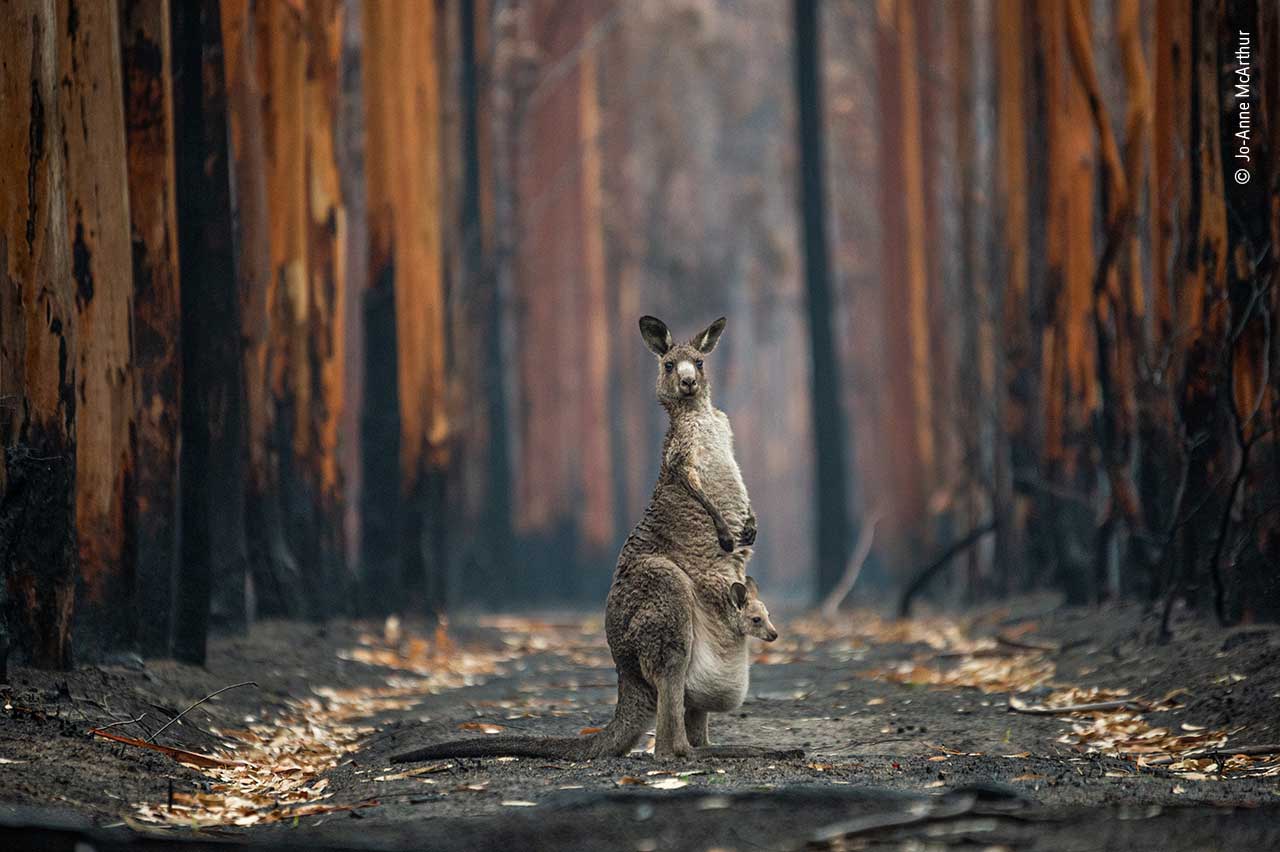 Finalist Jo-Anne McArthur's "Hope in a Burned Plantation" captures a kangaroo with a baby joey in her pouch standing in a scorched forest in the aftermath of Australia's bushfires.

The haunting image fell under the "Animals in their Environment" category. It was taken in early 2020 at a eucalyptus plantation near Mallacoota, Australia, reports CNN's Hannah Ryan. McArthur flew to Australia and worked with Animals Australia to document the stories of animals affected by bushfires.

Dancing in the Snow 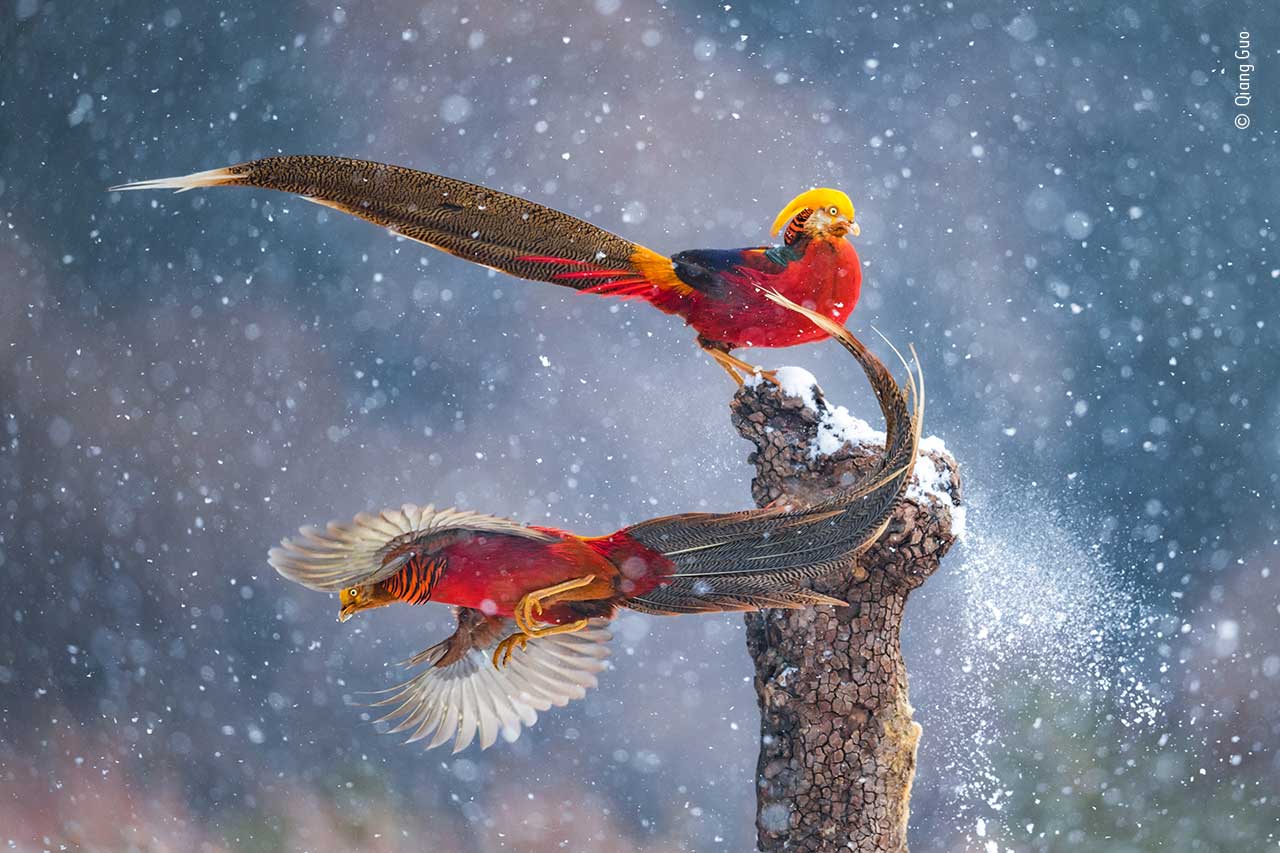 'Dancing in the Snow' by Qiang Guo, China Wildlife Photographer of the Year/ Natural History Museum

In Qiang Guo's "Dancing in the Snow," two vibrant, jewel-toned male golden pheasants perch on a tree stump. One sits on top of the perch with its black-dappled tail silhouetted against a blurry, snow-sprinkled background. Its ruby-feather friend has just taken flight with its rainbow wings outstretched.

The birds, native to China, kept swapping places on the trunk when Guo snapped the shot at the Lishan Nature Reserve in Shanxi Province. It was featured in the Behaviour: Birds category.

The Eagle and The Bear 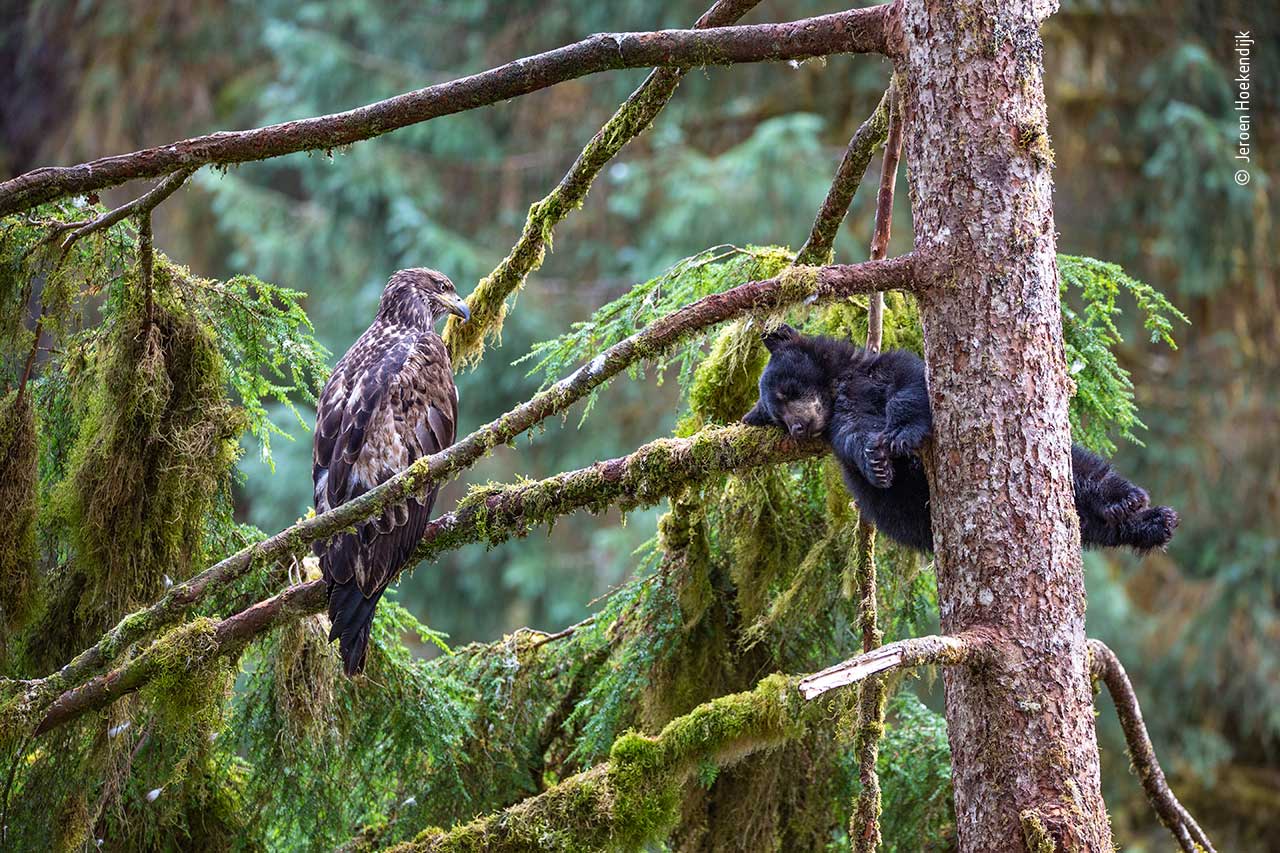 'The Eagle and the Bear' by Jeroen Hoekendijk, the Netherlands Wildlife Photographer of the Year/ Natural History Museum

The final featured image in the competition was Jeroen Hoekendijk's "The Eagle and the Bear". A roosting juvenile eagle accompanies a snoozing bear in a scene reminiscent of a children's movie. Bear cubs will climb trees for safety while waiting for their mothers to return with food.

It was taken in the temperate rainforest of Anan in Alaska and placed in the "Animals in Their Environment" category.

The top five images chosen by the public and winners of the 57th Wildlife Photographer of the Year competition will be on display at the Natural History Museum in London until June 5, 2022.